Looking for somewhere ‘cool’ in Vegas to take your kids for an afternoon? Read on to learn about Shark Reef Aquarium tickets and discounts. 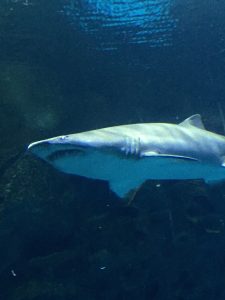 The Shark Reef Aquarium at Mandalay Bay  is a journey through a slowly sinking temple, housing some of the most dangerous predators in the world.  Those terrifying sharks!   View a diverse selection of amazing aquatic wildlife, including 100 sharks, (15 species in all) along with exotic fish, reptiles and sea turtles.

Featuring more that 2,000 animals, Shark Reef Aquarium is comprised of nearly 1.6 million gallons of water in 14 exhibits, including rare Golden Crocodiles, Piranha, a Touch Pool Experience and over 30 sharks in the 1.3 million gallon Shark Exhibit.  Polar Journey is a new traveling exhibit.  This interactive experience, gives guests a glimpse into the Earth’s polar regions and the animals that call them home. 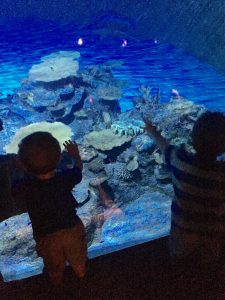 Plus, check out their Undersea Explorer VR Theater.  A 36-seat motion-platform VR theater is at the heart of the experience. Put on your headset, sit back in the motion seats and be immersed in a world of undersea adventure.  The theater is included with Shark Reef Aquarium & Undersea Explorer package. VR films for ages 5 and older, younger children can enter the exhibit but must be accompanied by an adult. During VR experience children under 5 will need to rotate with a guardian or parent.

My sister and I took our kids  there a few years back.  Yes, it’s not a typical aquarium, and yes, tickets can be high if you aren’t used to our Vegas prices.  Hopefully, I can help you out with that.  But, that being said, it is one of 2 tiny aquariums we have in Vegas and I think it’s worth the trip.  Especially for young kids who just love watching fish.  If you are from a city that has a large aquarium, or a Sea World, etc, you might not be that impressed.  Be prepared for a long walk through the hotel, but it’s a large undertaking for a Vegas property and they couldn’t just put it in the middle of the resort!

Now, you can reserve your entry time! To manage capacity limits, Shark Reef Aquarium has timed ticket entry. During peak times, the Aquarium may sell out of tickets, please reserve in advance for a preferred date and time. Entry time is good for the 30-minute window selected. 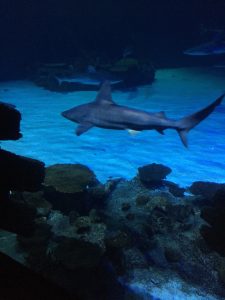 Since opening in 2000, Shark Reef Aquarium has inspired nearly a million visitors a year, and tens of thousands of the Las Vegas Valley’s school kids have had the opportunity to visit Shark Reef under the school group program.  In March 2003, Shark Reef Aquarium became the first animal care facility in the State of Nevada to be accredited by the Association of Zoos and Aquariums. They continue to hold this distinction as first and only to this day. 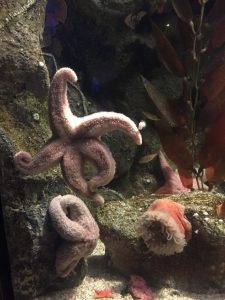 The Shark Reef prides themselves on conservation and houses some rare and difficult to find species in their tanks.  They also have several species of offspring born here to ensure that populations in the wild are not depleted.  Here is a list of the endangered and threatened species that you can see at Shark Reef:

These species are rare to see in zoos and aquariums but are exhibited at Shark Reef Aquarium: 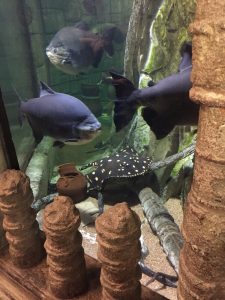 Here are a few ways to grab discount tickets to Shark Reef Aquarium:

MyVegas Rewards members- This is a free-to-play mobile app and game where you can earn free hotel rooms, meals, show tickets, and more.  Acquire points to redeem for discounts on tickets or if you have enough points, free tickets.

Ticket prices are currently as follows:

If your kiddos really like the aquarium,  it’s a great place to visit in the summer heat when it’s too hot to be outside.  You may benefit from an annual pass which includes:

This is $80, and buying separate tickets as a NV resident costs an adult and one child $78 for just 2 visits.  Not a bad deal to just get the annual pass.  Or, if your kids are 3 and under, then you can go often just on an adult pass.

You can get free daily email updates of all the free and cheap events around town, plus deals and discounts on entertainment and dining, by subscribing to our daily newsletter.  For even more cheap fun, “like” us on Facebook and follow us on Twitter.  Check out these other great posts for more free and cheap things to do for kids in and around Las Vegas.

Free and Cheap things to do with Kids in Las Vegas

Free museum visits once a month in Las Vegas